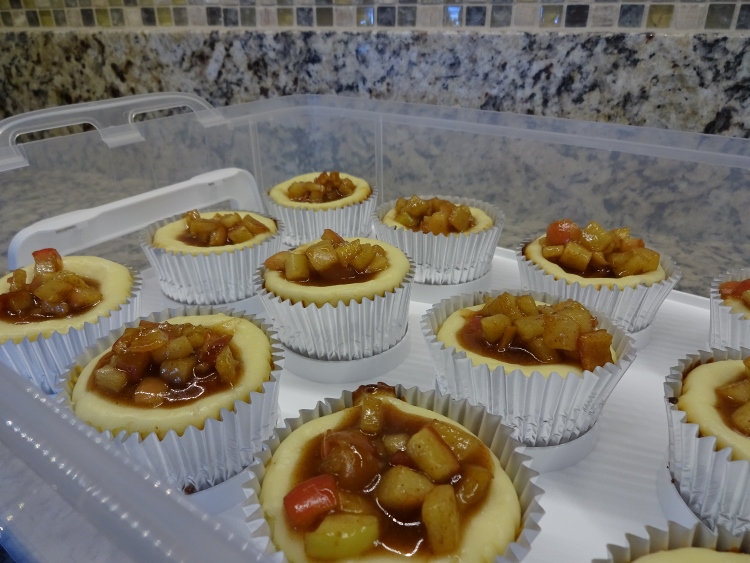 I love my cupcake/baked goods carrier! Its perfect for bringing goodies to work with me!

Apple pies are not only the quintessential American dessert, but also a staple of fall time dinner tables. In fact, sometimes it seems like that’s the only time we see apple desserts. Well, I say, no more! Let the apples be free from their 3-month engagement with chilly temperatures and falling leaves! And I have the perfect dessert to bring apples to center stage this winter: Mini Caramel Apple Cheesecakes!

Okay, I may be acting a bit dramatic here. And truth be told, I may have made this recipe two months ago and am only now sitting down to write about it. But I thought “releasing the apple from the confines of Fall-time” was a good excuse, didn’t you?

So let’s get to it, then. These mini cheesecakes are easy to make, easy to eat, and easy on the eyes (but what cheesecake covered in caramel sauce isn’t?) The original recipe comes from my favorite food magazine, Taste of Home. The original batch makes 12 cheesecakes, but I’ve been known to double the recipe because of high demand! 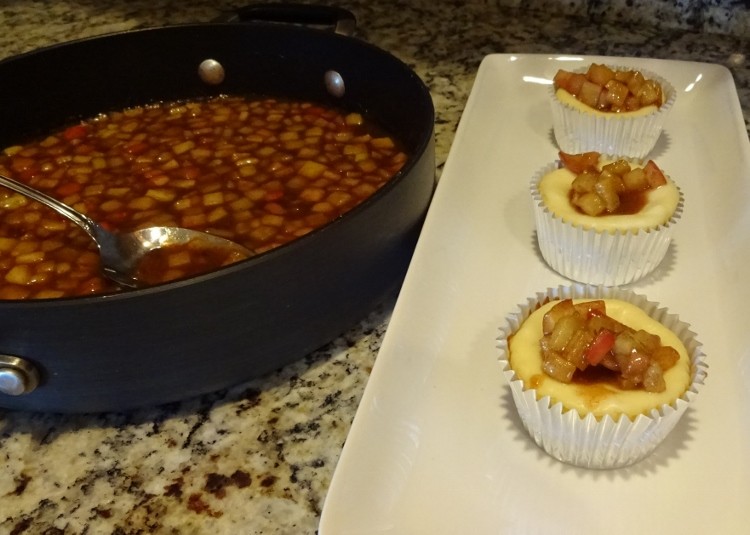 The warm caramel topping really jazzes up the chilled cheesecakes.

Without further ado: get ready, get set, bake!

First things first, make sure to soften your butter and cream cheese well ahead of time. It’s best to set these ingredients out (along with your eggs) about one hour before you intend to start baking. Because I spend a lot of time baking in the early mornings, I usually set my ingredients out the night before (I also do this because my hand mixer is highly underpowered, and even slightly hard butter gives it a hard time).

When you’re ready to begin, preheat the oven to 350° F. Line a muffin tin with cupcake liners (I used aluminum liners but paper works just as well). Crush your graham crackers using whatever method you would like (don’t forget my favorite method of smashing them with a hammer, just for funsies), and mix the crumbs together with the cinnamon and sugar. Pour in the melted butter and mix together until all the crumbs are wet. Using a tablespoon measure, scoop 1 large spoonful into each cupcake liner. Then use a spoon, a small glass, or your fingers to pack the crumbs evenly into the bottom of the liners. You may have some crumbs left over, you can add more to the 12 liners if you’d like, or just toss the extras. Depends on how much crust you like with your cheesecakes! 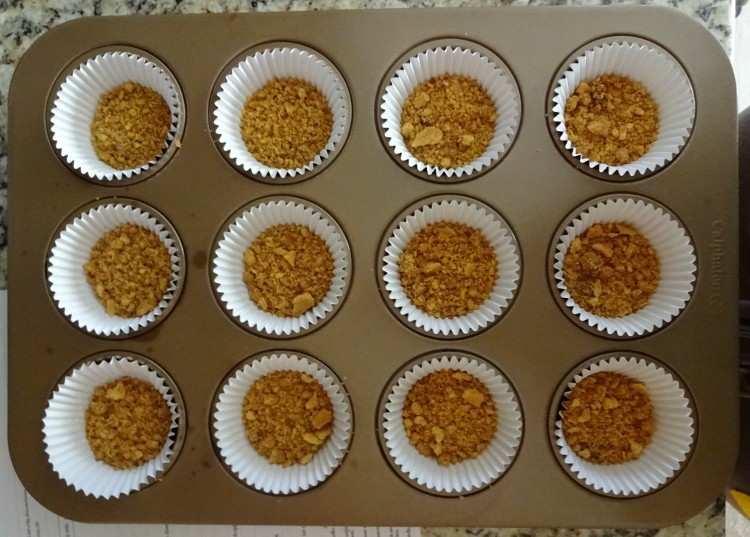 Spoon the graham crackers into your cupcake liners then press down firmly to make the crust.

To make the cheesecake batter, beat the cream cheese and sugar until smooth (about 3-4 minutes). Then beat in the vanilla, followed by the eggs (one egg at a time!). Once the mixture is just blended, use a spring-loaded cookie scoop or ladle to distribute the batter among the 12 liners. They should be about 2/3 full. Pop them in the oven for 15-18 minutes, keeping an eye on them for doneness. I baked mine for 18 minutes, and they were cooked well but a bit brown on the edges (but this could have everything to do with my choice of aluminum cupcake liners, as well!), so just be sure to keep an eye on them as they bake. Every oven is different, after all.

After the cakes have baked, remove the pan to a wire rack and allow them to cool in the pan for about half an hour. After that, remove them from the pan and place the cheesecakes into the fridge. The cheesecakes will keep in the fridge for several days, but I recommend making the toping right before serving!

To make the caramel apple topping, finely cut the apple into small chunks (about ¼”). In a skillet, melt the butter with the cinnamon, cloves and sugar. Add the apple chunks and cook until the apple has softened (about 4-5 minutes, and don’t be afraid to taste for doneness!) Finally, add the caramel sauce and cook for 1-2 minutes. Then remove from heat and spoon on top of the cheesecakes. 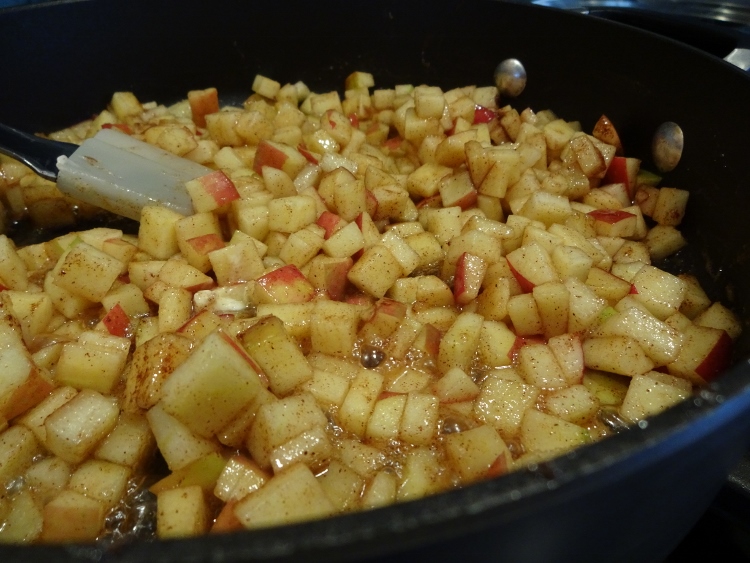 Mmmm, look at all that cinnamon-y goodness!

Finally, set one aside for yourself before handing them over to your friends or family – because trust me, they’ll be gone before you know it! 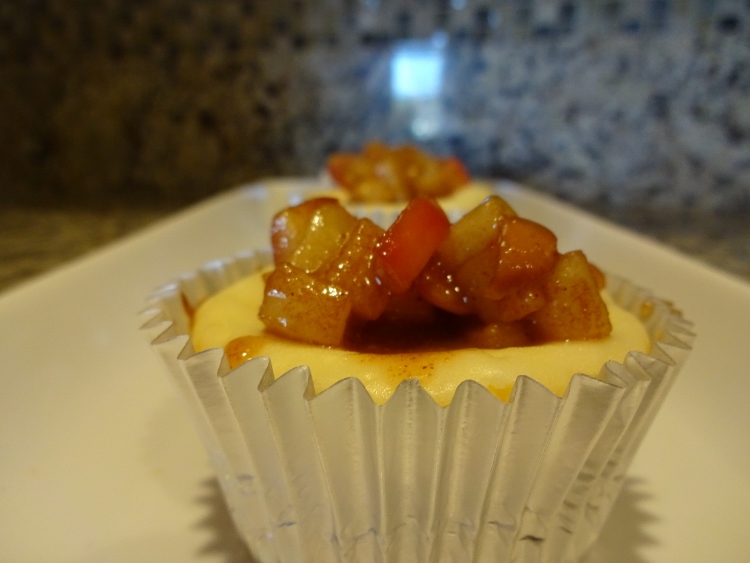 Ready to dig in!