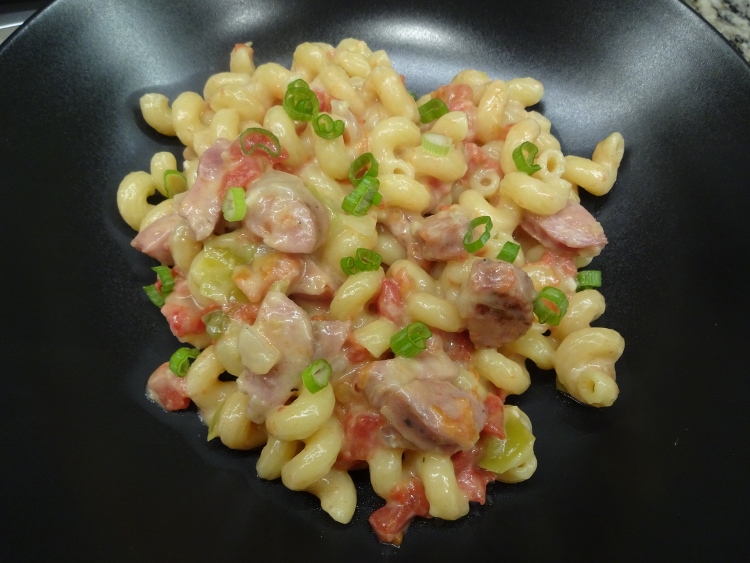 I could eat this pasta for dinner every night, it’s a perfect balance of sweet, creamy, and spicy.

Well, after a 6 month hiatus, it feels good to be sitting down to write a recipe again. So much has happened in the last 5 months, I don’t know where the time went! Most exciting of all is that I’ve started my MBA! I’m going online through the University of Delaware, and I just finished my first semester of classes. Straight A’s! I think…grades aren’t technically finalized until Monday, but here’s hoping! It’s amazing how different business school is from engineering. It’s less stressful because the material is easier for me to learn, but its very time consuming. I’ve had to sacrifice a bit of my social life to keep up. But! Classes are over until February now, so I have some time to catch up on the 6 blog posts on my to-do list. 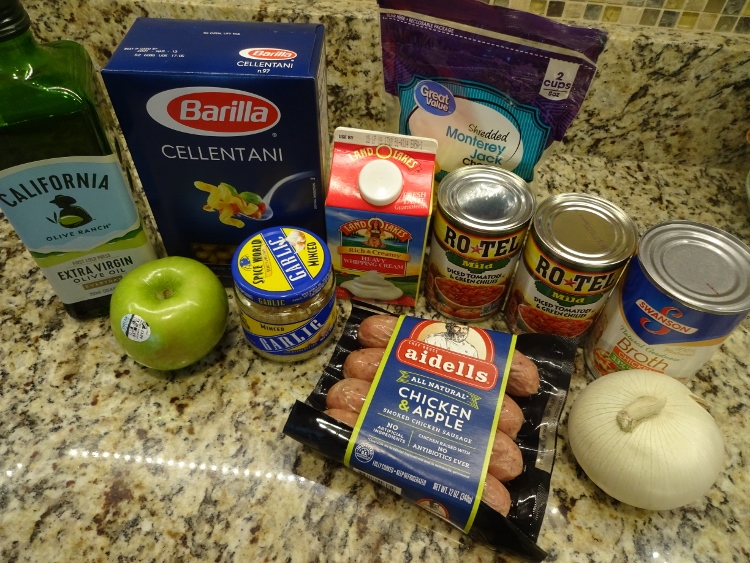 I thought this would be a great recipe to start with, because it reminds me of celebrations. I’ve been cooking this pasta dish for 4 years now, ever since I first saw it on Pinterest and tried it my senior year at VT. It comes straight from Michael at Inspired by Charm. I’ve made a few minor alterations, but overall, this recipe has been a hit from the beginning. I remember making it for my classmates during big study sessions, and making it for all my “adopted” family members at our beach place. I think the sweet flavors of the apples in this dish are perfectly balanced by the slight spice from the Rotel and Monterey Jack cheeses. Plus, it’s a one pot meal, which just makes this dish that much better!

First, chop the onion and the sausage. I cut my sausages in half lengthwise, then into half moons about 1/4″ thick. I think that smaller bites makes the sausage more evenly distributed in the dish – but feel free to dice your sausages up however you like them! 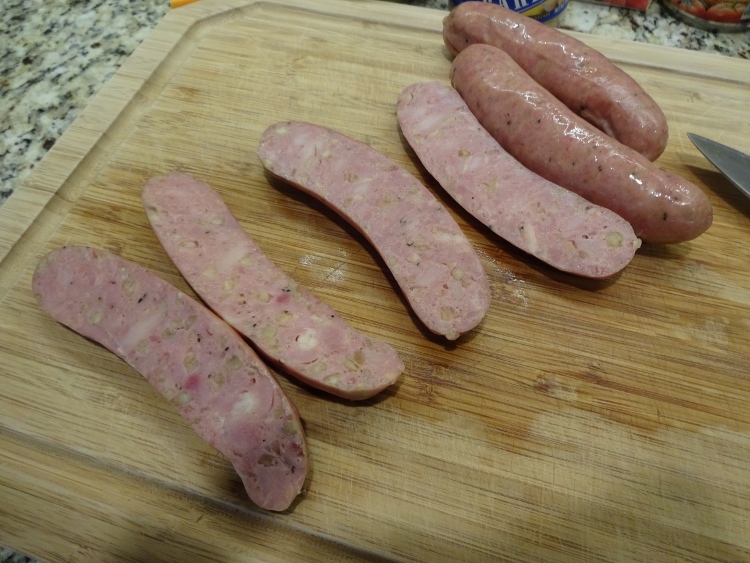 I slice my sausages in half lengthwise, then dice them into 1/4″ thick half-moons.

Heat olive oil on medium in a large pot, then add the onions and the sausage. Cook until the onions are soft and beginning to brown. 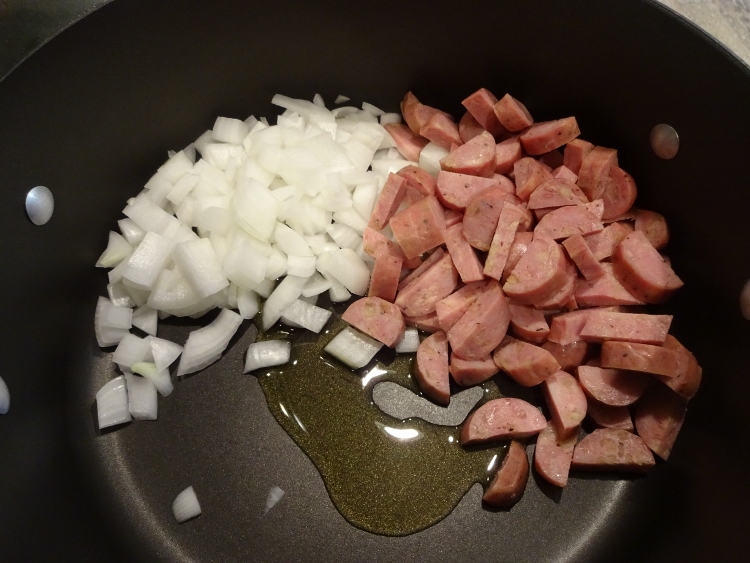 First step is to cook the onions and brown the sausage

While cooking, dice your apple (there’s no need to peel it). Once onions are browned, add the apple and garlic to the pot. Cook for 1-2 minutes (we don’t want the apples to get too soft, or they will disappear!) 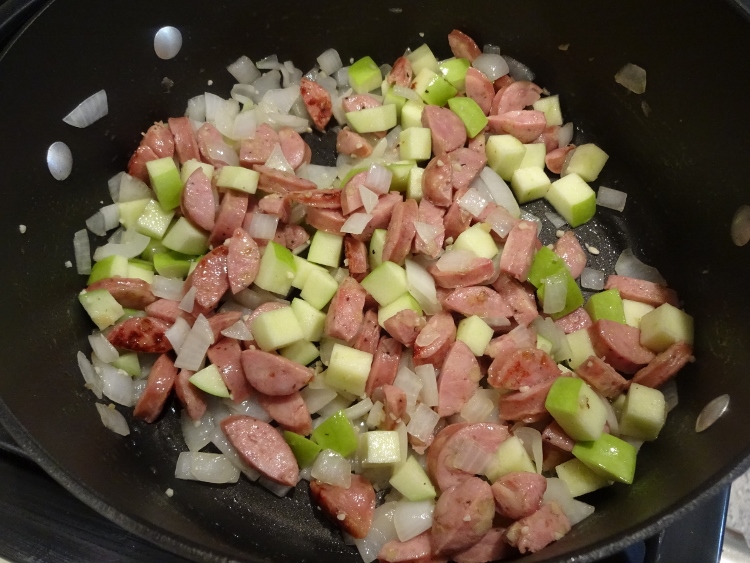 Add the diced apple and garlic, but don’t let it cook too long or the apple will turn to mush!

Next, add the chicken broth, Rotel, pasta, heavy cream, and salt and pepper to taste. Stir well to combine, then cover and bring to a boil. 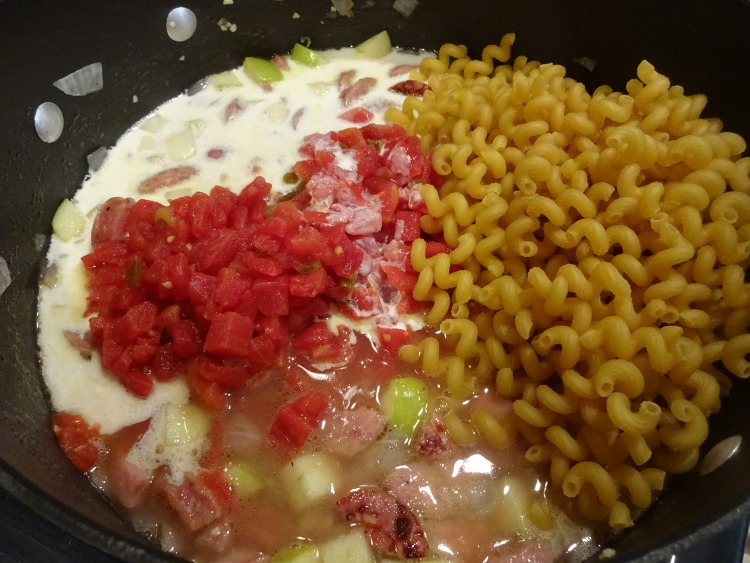 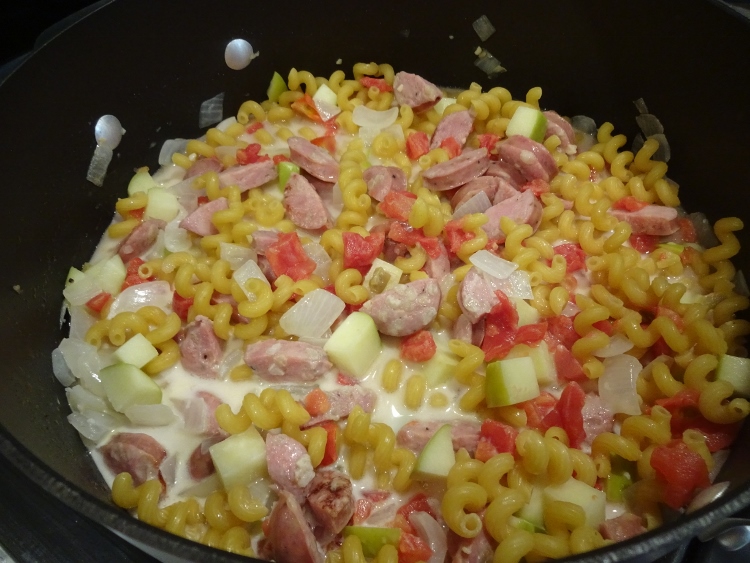 ….and stir to combine

Reduce heat, cover, and simmer for 15-20 minutes, or until the pasta is cooked. Stir occasionally. 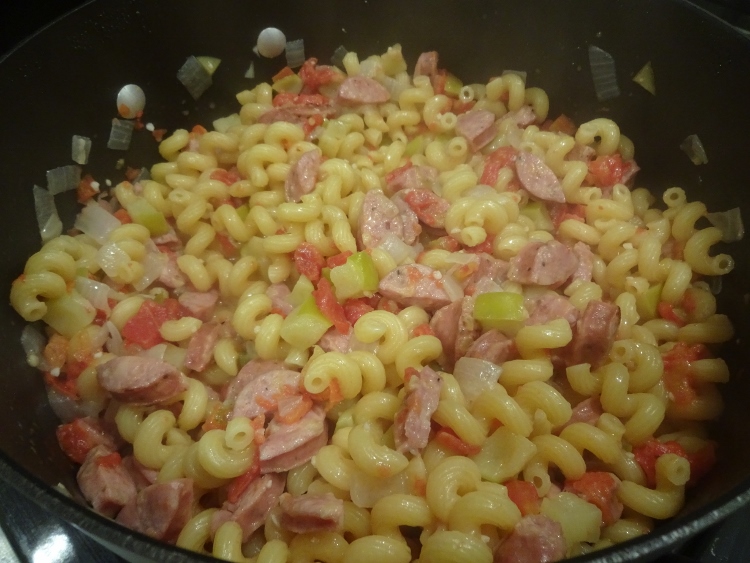 After a quick 15-20 minutes, viola! We’re ready for final touches.

Once pasta is cooked, remove the pot from the heat and stir in 1 cup of cheese. Use the remaining cheese to top each plate, along with the green onions, should you choose to use them. Enjoy while hot, maybe with a nice loaf of bread or a fresh Caesar salad! 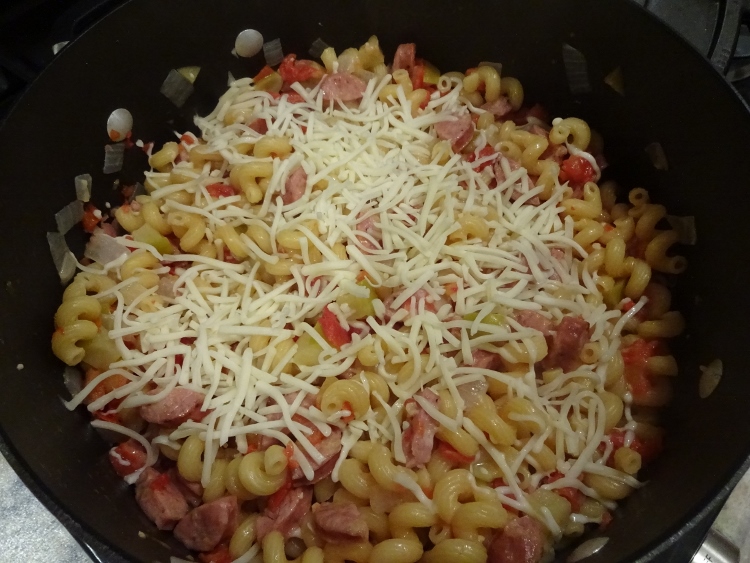 A generous sprinkle of cheese gets stirred in right before serving – but make sure to save a little for topping each bowl!